NASCC 2018 (#NASCC18) hosted by the AISC, was held in downtown Baltimore, MD at the Baltimore Convention Center. Another record crowd with over 5,000 attendees, the show featured more than 200 exhibitors and 100s of different educational seminars! The Steel Conference was an overwhelming success – as were the crab cakes at the area’s great restaurants!

When attendees approached our booth, visitors still clamored for more information on ASTM A1085. They were excited to hear about our new ASTM A1085 Availability Chart that outlined common ASTM A1085 sizes that are readily available and those that are a little harder to come by. We heard this new tool would be valuable to both engineers and fabricators. 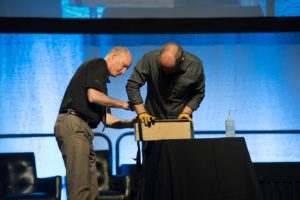 During NASCC, I had the opportunity to introduce this year’s keynote speaker, Dan Goods, Visual Strategist at NASA’s Jet Propulsion Laboratory. Dan runs a creative studio, working on everything from art pieces that showcase some of the incredible discoveries by NASA to helping visionaries brainstorm the missions of the future. Dan shared his remarkable artwork, how he helps NASA scientists imagine the impossible (such as how living on Mars might look) and his personal story of creating a career that did not formally exist.

With all the great education seminars at NASCC, its hard to pick out a favorite but two stood out to me this year:

HSS was prominently featured in the IDEAS2 award ceremony, including U.S. Bank Stadium and Seattle’s North Transfer Station. IDEAS2 recognizes projects where structural steel has been utilized in an innovative manner. Congratulations to all the winners this year!

If you have questions about the tools you learned about at NASCC, need help designing with HSS or want to know how HSS can benefit your next project, please reach out to me at any time –bradlee.fletcher@atlastube.com

See you next year at NASCC in St. Louis!